Ashur Sungazer was a human male. He dressed professionally, albeit with an outdated fashion sense. He had dark hair and a beard.

Ashur Sungazer was as accredited and accomplished scholar specializing in galactic history. During his pursuit of knowledge at the Library Phelar on Eriadu he became enthralled by the stories and legends of the Jedi.

His curiosity drew the ire of his colleagues and his reputation was tarnished. Despite the widely held belief the Jedi never existed, that they are merely myth and charlatan cover story, Ashur was increasingly convinced of the evidence.

Ashur helped the Jedi Callia steal the talisman relic from the libary and joined the party in their adventure to the deep core in search of proof of Jedi existence.

Sungazer is overjoyed by the discovery of the ancient Jedi starship and has been happily busy cataloging and documenting all the findings. Much to his chagrin, he did agree to a deal with Zet that after his research is complete, each of the others get to select one relic to take with them – the rest remain in Ashur’s care to be delivered to an appropriate collection.

A year later, Ashur received word from his sister, Asha on the planet of Phemis. She and other scientists, as well as miners were eager to defect from the Empire. The conditions on Phemis had become intolerable, the planet being under an embargo because of its Rubat crystals. However, Asha died while escaping Phemis. Her locket was given to Ashur, who realized that this was a secret to be uncovered.

Ashur learned his sister’s locket contained the coordinates of Telos, a planet linked to Val Isa’s second painting: Earth. The scholar believes the Jedi Master left clues across the galaxy, but to what he was unsure.

This was enough to convince Randall Nebula that the secret was worth exploring. He assigned a group of rebels, including Arich Trace, Kal, Nesma, and Namira. Ashur had the group meet with a Jedi named Kay’lan on the planet Dantooine, where a Jedi Academy is held in secret under the leadership of Callia.

Unwilling to pass up the opportunity to delve deeper into his sister’s discover, Ashur joined the excursion to Telos, where the coordinates led them to the Northern polar ice cap. A long forgotten millenia-old temple was discovered. While exploring the temple, which was uncovered to be the home of an ancient Jedi Master, Atris, Darth Ravenous clashed with the group in an effort to get what she determined to be a weapon. Namira detonated a statue the Dark Jedi was interested in, causing what appears to be a map to be broken into shards, half buried in Ravenous’ body, half in Namira’s shoulder. 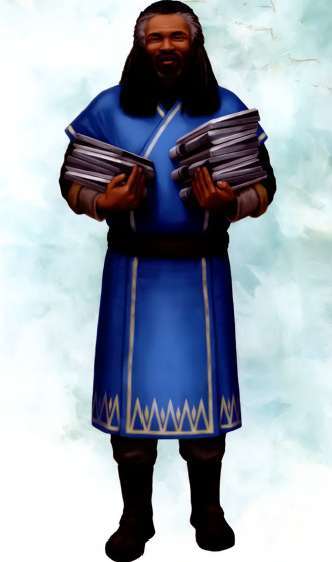