Katryn Organa is a blonde human woman from Alderaan.

Major Katryn Organa was born on Alderaan to a noble house. Her loyalty to the legitimate government, the Emperor, left her estranged from her family.

Major Katryn Organa was an Imperial officer assigned to the patrol fleet under the command of Rear Admiral Genarus Thorn in the Outer Rim Territories.

The Major was in command of an Imperial Customs Corvette, the Rectitude which was involved in a bombing while engaged in a routine search of a passenger cruise liner, The Corellian Runner.

Her arm was severed by a Jedi exile, Callia.

Major Katryn Organa was recruited by Inquisitor Zeng to serve as part of his anti-Jedi task force.

The Major recognized Callia as part of a group of rebel operatives who rescued a science team led by Zrask Giska’fey before they could complete their work on a weapon of mass destruction.

At the Onslaught of Arda I, the Major arrived with the Inquisition task force an engaged the rebels. She was last seen being thrown in the air by the explosion of the shuttle triggered by saboteur Rakine Bokete.

After the destruction of her home world, the Major decided she could no longer support the Empire, regardless of its legitimacy as legal government. She contacted a rebel cell and informed them of an important listening post on Onderon.

When a rebel squad arrived at Whisper Base, she greeted them in the shuttle bay. 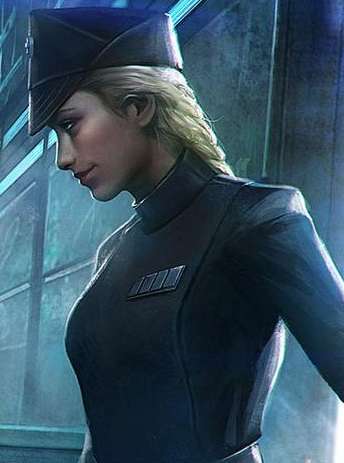