Nossk was a Trandoshan smuggler. He betrayed his partner, Qos’ant’osond while on a cargo run, leaving his best friend marooned on an asteroid space station in the Outer Rim Territories and absconding with their star ship and their cargo.

Nossk is a skilled mechanic with a passion for demolitions. He was discovered by the protagonists to be on the Selonian orbital ship yards.

Nossk had been targeting corporate representatives on throughout the Corellian sector. His most recent victim was the project lead for Kuat Drive Yards in the sector, Dr. Zesta Fax.

Nossk was responsible for the shuttle accident that killed the senior design team of the competing shipwright, Corellia StarDrive, which was subsequently merged into CEC via a hostile takeover. 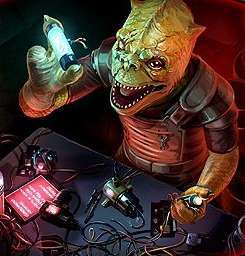