Rikkard Bel is a human male at the middle of his life. He dresses extremely well, as befits a high ranking member of the Corellian Engineering Corporation.

Bel is an executive on the CEC board and has been actively involved in the corporations aggressive acquisitions in recent times.

With the confidence of the board of directors, Bel next began the ambitious project of replacing Kuat Drive Yards as partner for the Selonian owned and operated orbital shipyards. This was proving difficult, but a well-timed, however tragic explosion that killed the Kuat Drive chief administrator on Selonia, Dr. Zesta Fax gave Rikkard Bel the leverage needed to pen an agreement with the Selonians to take over transport and distribution of Selonian resources.

However, Rikkard Bel’s influence was widely geered by the Selonian people, whose economy fell into recession. While on Selonia for a visit, Qerzer realized the plight of their people and incited a planetery rebellion. Then, they captured Rikkard Bel, who it was determined had been working with Nossk to cause a series of explosions that killed competitors to further Bel’s career.

Rikkard Bel is currently aboard the Freedom’s Purchase in the custody of the Commander Randall Nebula’s rebel cell and being held for questioning. 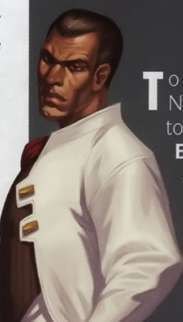