Samara Vorrox is the daughter of Gorn. Like her father, she is a Duros, though with a deeper blue complexion.

Samara has a lot in common with her father. Gorn taught her to be resourceful, think first, think fast, and get the job done.

These ideals kindled a passion for justice within Samara, much to her father’s chagrin. She joined the rebellion to fight the Empire. This, unfortunately led to her capture.

Samara’s location was discovered by Cassiopeia Wong while on board Rear Admiral Genarus Thorn‘s ship. This information was sold to Gorn by Zetnu’ri, who had taken the information from Cassiopeia.

Zet and the others agreed to free Samara from her Imperial prison on Valc VII. She was one of several force sensitives being held captive by Inquisitor Xao. 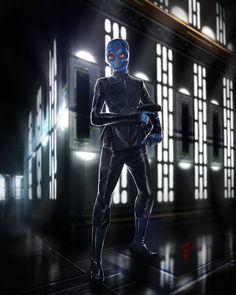