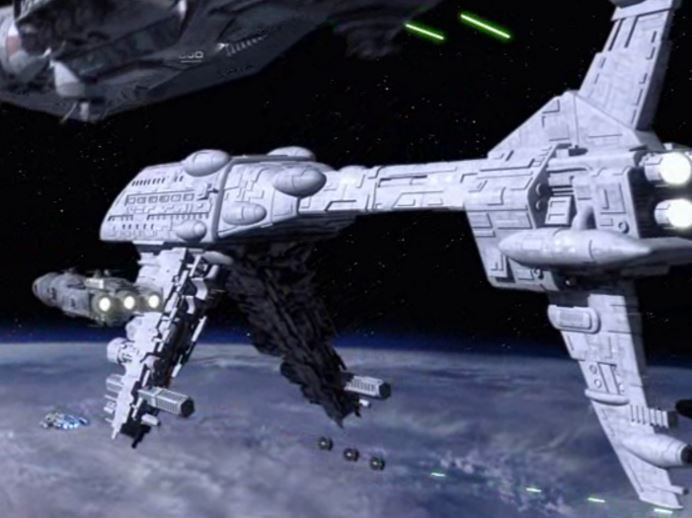 The assault frigate Mark I was a modification of the Dreadnaught-class cruiser that was used in the Rebel fleet.

As the Rebel Alliance began to acquire Galactic Republic-era Rendili StarDrive Dreadnaught-class starships, it found the required 16,000-being crew to be difficult to manage and procure, yet they were in desperate need of warships.

After equipping Dreadnaughts with droids and automated systems to reduce the crew requirement to 5,000 beings, thus rendering the ships usable, Rebel engineers began modifying Dreadnaughts to allow for greater speed and efficiency while retaining the original weapon systems. The final product was only recognizable as a descendant of the Dreadnaught-class by the nose of the ship. Most of the internal structure was exposed to space, while a dorsal and ventral fin provided added maneuverability.
These modifications removed the internal docking capacity of the Dreadnaught-class, but the ships were equipped with 20 umbilical docking fixtures like those on the EF76 Nebulon-B escort frigate.

The refits were expensive and time-consuming, but the Assault Frigate was considered to be a very effective combat warship. Though these warships were unique to the Rebellion/New Republic, the Empire made efforts to acquire them—a rather ironic reversal of fortune.

General Ran Niall led her rebel fleet from the helm of an Assault frigate Mark I, the Hopespring.