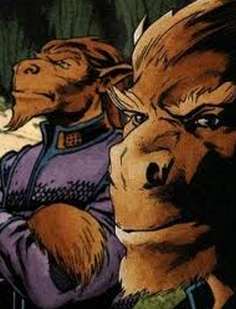 Bothans were a short race of furry humanoids who on average stood between 1.5 meters to 1.6 meters in height. Bothans were covered in fur which rippled in response to their emotional state by way of gentle ripplings.

Hailing from Bothawui and several colonies, Bothans differed in facial appearance and body structure with canine, feline, and equine features. They were known for being master politicians and spies, craving intrigue and subterfuge.

Zrask Giska’fey was a Bothan male who was held captive by Trex the slaver aboard his ship, The Krayt Fang until the Protagonists murdered Trex, hijacked the ship, and freed Zrask.