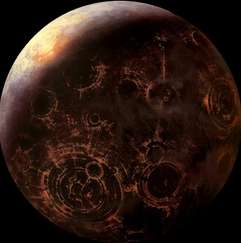 Coruscant, also known as The Imperial Core, was a planet in the Core Worlds and capital of the Galactic Empire.

It was generally agreed that Coruscant was, during most of galactic history, the most politically important world in the galaxy. In controlling Coruscant, these governments controlled most of the galaxy in the process.

Over the centuries, Coruscant had developed into an ecumenopolis, with a total of 5,127 levels of city built up from the crust by the time of the Clone Wars. The actual planet-wide metropolis of Coruscant was called Galactic City.