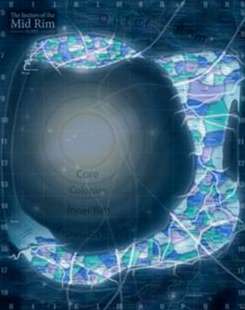 The Mid Rim, also known as the Mid-Rim, Mid-systems or the Mid Rim Territories, was a region of the galaxy located between the Expansion Region and the Outer Rim Territories.

With fewer natural resources and therefore a smaller population than many neighboring regions, the Mid Rim was a territory where residents worked hard for everything they had.

Nar Shaddaa is a world in the Mid Rim.