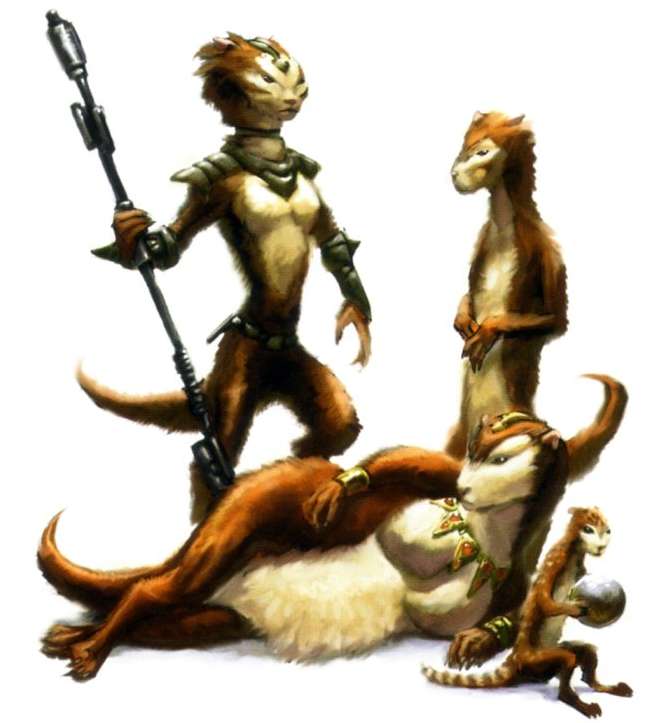 Selonians are a bipedal humanoid races believed to be descended from aquatic mammals. They are furry and tall, standing taller than most humans at an average of two meters.
Proportionally their bodies are mostly torso, with shorter limbs. Their long bodies were equally comfortable walking on either two legs or on all four

Their bodies were covered by a sleek brown or black fur and they normally did not wear clothing on their home world. However, when working or visiting elsewhere, they wore the appropriate clothing or outfits.

Selonia is their home world, found in the Corellian system.

Despite the massive starship traffic to the Corellian shipyards, many visitors and even some native Corellians knew very little of the Selonians and their distinctive unique alien culture.

In mindset, they were a thoroughly grounded and serious race who were primarily concerned with the safety of their people. This meant that the protection of their family dens and their species as a whole was a chief concern. The basis for this line of thinking was because they viewed that the needs of the society outweighed the needs of the individual. To those unaware of the deeper intricacies of the race, the Selonians appeared as an outgoing, friendly and charitable species. However, their interests rarely went beyond securing the good of their respective den. They also had a deep psychological need to reach a consensus when taking action. As individual Selonians felt that the actions of an individual impacted an entire den, they refused to lie as they believed such an act was a crime similar to murder. The underground nature of their existence meant that the Selonians suffered from agoraphobia and were more comfortable in confined spaces compared to open environments