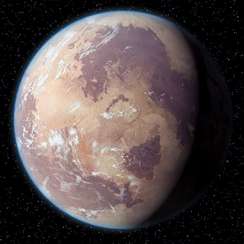 Tatooine was a desert world and the first planet in the binary Tatoo star system. It was part of the Arkanis sector in the Outer Rim Territories. It was inhabited by poor locals who mostly farmed moisture for a living. Other activities included used equipment retailing and scrap dealing.

The Hutt Cartel has several members who make Tatooine their home. Notably, Teemo the Hutt.

During their escape from Teemo’s palace, the protagonists fled Mos Shuuta and hijacked The Krayt Fang after murdering a Trandoshan slaver named Trex.