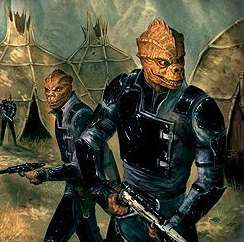 Trandoshans were a race of large reptilian humanoids. They are bigger and stronger than most humanoid species, had infrared vision, and could regenerate lost limbs.

The Trandoshans were a warlike species who allied early with the Empire, taking Wookiees as slaves.

The Trandoshans originated on Trandosha, also known as Dosha or Hsskor. It was in the same star system as Kashyyyk, the homeworld of the Wookiees. It was the Trandoshans who suggested to the Galactic Empire that they use Wookies as slaves.

The protagonists encountered a Trandoshan slaver named Trex, cut off his arm and stole his spaceship.

Qos’ant’osond was previously partners with a Trandoshan named Nossk.